The Seychelles archipelago comprises 115 islands that extend in a gleaming arc from 4 to 10 degrees south of the equator and between 1600 and 480 km from the east coast of Africa.

41 of these islands represent the most ancient mid-oceanic granitic islands on earth while 74 are low-lying coral atolls and reef islands, set like gemstones amid the sparkling azure waters of the western Indian Ocean.  The Seychelles are sanctuary to exotic life forms and primeval forests; so spectacular, it was once believed to be the original site of the Garden of Eden.

Seychelles is host to two UNESCO World Heritage sites: The legendary Vallée de Mai where the fabulous Coco-de-mer, the world’s heaviest nut in the perfect form of a female pelvis, grows on towering palms, and Aldabra, the planet’s largest raised coral atoll.

The islands became a British colony in 1811 and gained independence in 1976 as a republic within the Commonwealth.  The population, a mere 87,000, is a harmonious blend of peoples with African, European and Asian roots. The official languages are English, French and Creole, the colourful local patois that is an adaptation of 17th century French. Mahé, the principal island and home to the capital Victoria, and neighbouring islands Praslin and La Digue together, form the cultural and economic hub of the nation.

Offering immense diversity, the healthy tropical climate of the islands and a rich choice of activities such as sailing, diving, fishing, hiking and island hopping provides any discerning visitor with a fascinating holiday experience. Seychelles has recently been voted as the finest honeymoon destination on earth.  The weather is best between June and September and with most weddings falling during our summer months, it would be difficult to find somewhere more idyllic to spend a first holiday together as Mr & Mrs! 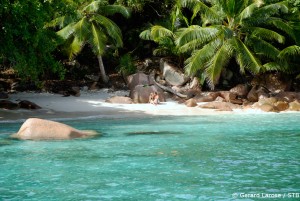 We recommend two or three islands during your stay in the Seychelles in order to appreciate the true diversity of this breath-taking paradise.