Until recent years, Oman evaded even the most intrepid of travellers, however it is now becoming ever popular, especially for those looking for something a little different for their winter holiday as temperatures generally range between 24 º and   35 ºC.

Most journeys begin in the country’s capital, Muscat, where ancient and modern co-exist.  Boutique shops in the commercial district and deluxe resorts that now fringe the city’s beaches have been sympathetically built against the backdrop of historical structures such as the forts of Jalali and Mirani and the awe-inspiring Sultan Qaboos Mosque. Rugged interior mountain ranges such as Al Hajar, as well as the imposing forts of Nizwa, Bahlia and Jabrin are easily accessible from Muscat. 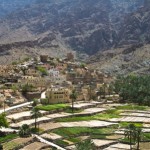 To the east of the country, the copper-coloured, high, rolling dunes of Wahiba Sands can be found.  During a 4×4 excursion, Bedouin tribes and the elusive desert oryx may well be discovered.  For a truly unique experience, spend an unforgettable night under a million stars by staying at one of several campsites in the region. 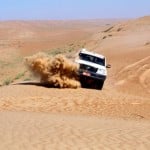 Dhofar province and its capital, Salalah is located in the southern region of Oman. During its unique ‘Khareef’ (monsoon season), which occurs between June and September, the landscape takes on a more lush and tropical appearance. We would suggest a 4×4 journey to the mostly unexcavated ‘Lost City of Ubar’ during your stay.

The Musandan Peninsula is isolated from the rest of the country and is located in the extreme north of Oman.  Overlooking the Strait of Hormuz and separated from the rest of the country by the U.A.E, we recommend a traditional dhow on the emerald waters around its beautiful coastline as the best way of viewing this fjord-like landscape.  For something more active, canyoning, mountain biking, microlighting and paragliding can all be found in this region.