My Florida family holiday travel dates were chosen with great care this year – my husband wanted the weather to be hot and rain free, I didn’t want too hot and certainly not humid but as with most weather patterns around the world at the moment, the temperature for May turned out to be “unusual for this time of year” and “hotter than average”. 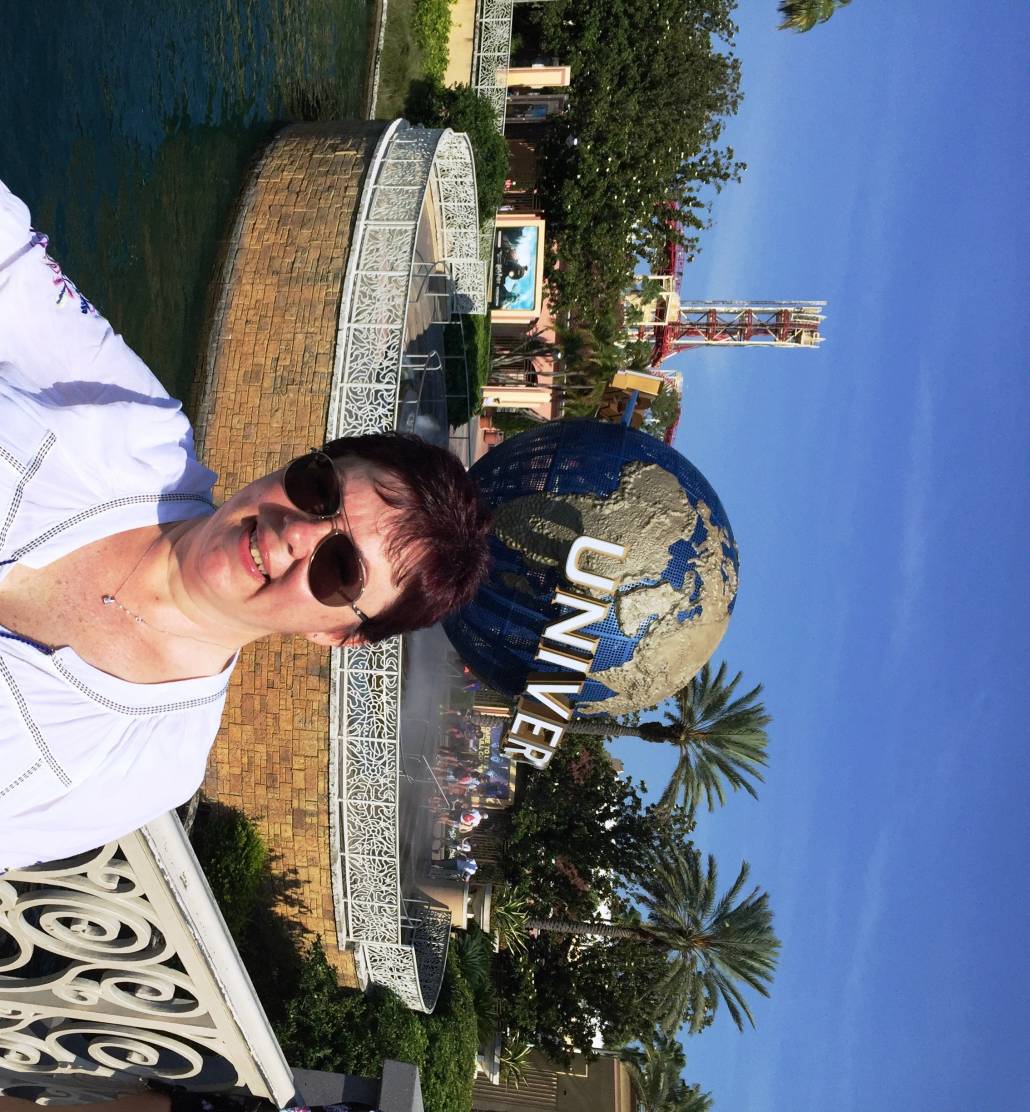 The advantages of staying at a hotel within a theme park resort is having the ability to be able to enter the parks an hour earlier than the official opening time to the public, come and go as the temperature changes and not having the additional costs such as car hire and car parking to take in to consideration. Depending on the theme park resort hotel that you stay at, you might even get complimentary ‘Express Passes’, which reduces ride queuing time quite significantly. Of course, the benefits are only available for the resort that you were staying within – IE: Disney or Universal. 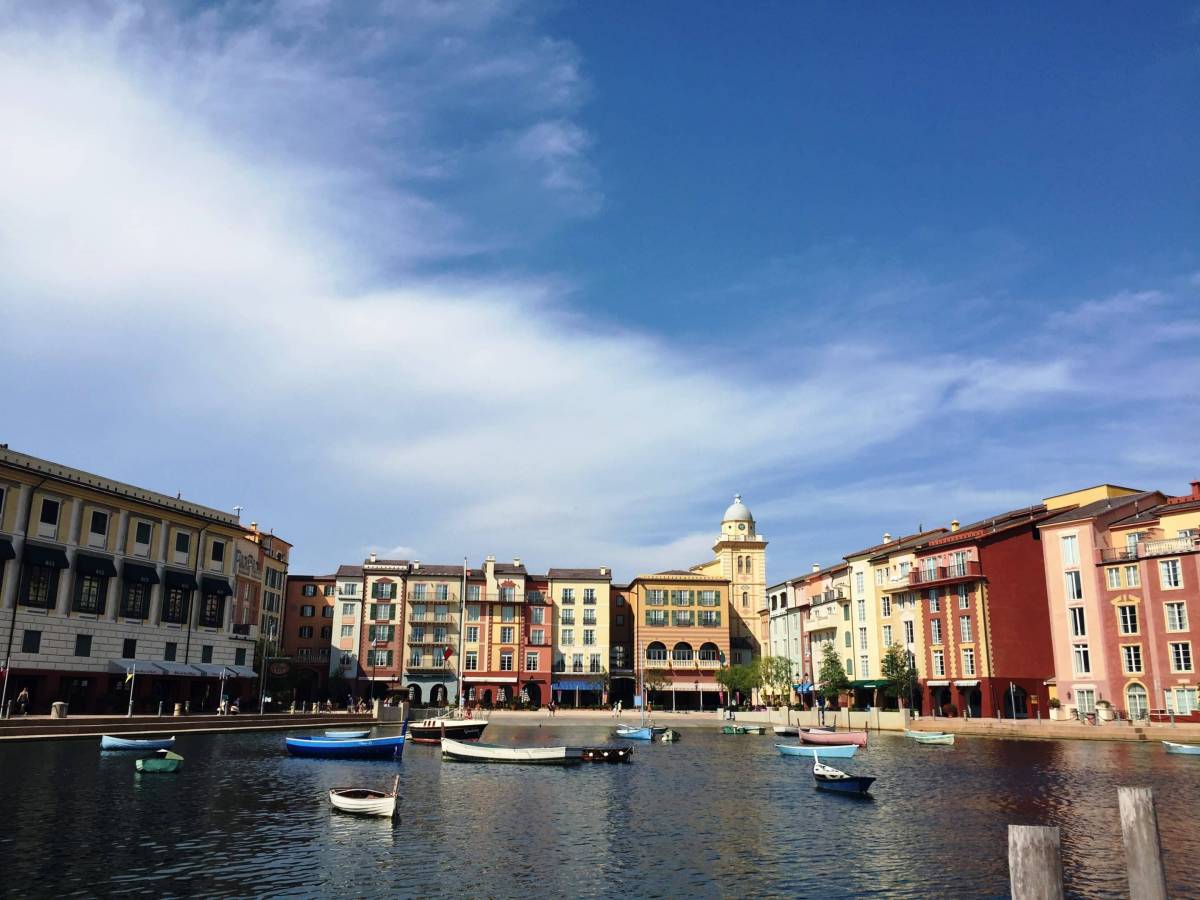 We chose to stay at Loews Portofino at Universal Orlando Resort. Built in the style of an Italian village, the Loews was just a 5-10 minute complimentary water taxi ride away from Universal Citywalk – the dining and entertainment centre of the resort and access point for Islands of Adventure and Universal Studios Florida. For Volcano Bay, Universals very own water park, there were regular complimentary coach shuttles to and from not only the Loews but other hotels within the resort too.

For the first couple of days, we covered as much of the parks as possible in one swoop, making maximum use of our express passes. For visitors without the express passes, the queues were long, often just undercover but not necessarily inside, with fans every so many yards re-circulating the warm air in order to try to keep those queuing as cool as possible. The two main Universal Parks are smaller, in comparison to those in Disney, so with the express passes in hand and some careful advance planning, it is possible to cover each park fully in a full day.

The water taxis run every 15 to 20 minutes so even if we missed one, we weren’t waiting long before another came along to whisk us back to our hotel.

Our pool of choice at the Loews was the Beach Pool and yes, it has its very own small beach. Regardless of the time of day you were there, the pool was busy with guests keeping cool and, on more than one night, it was filled with guests enjoying a movie whilst sipping a cocktail, dining at their lounger, singing along to music or watching a film until after 11pm; the children simply played, laughed and tired themselves out!

Sadly, we only had time for one venture over to Disney on this holiday, which was just a half hour cab ride away from Universal. Our Disney park of choice was EPCOT as we wanted to catch the fireworks spectacular at the end of the day. A one day ticket was extremely expensive so a lesson was learnt – always purchase the multi park tickets before leaving the UK that covers both Universal and Disney, even if you don’t think you will get to all of the parks. Buying tickets on a day-by-day basis is the least economical option available! 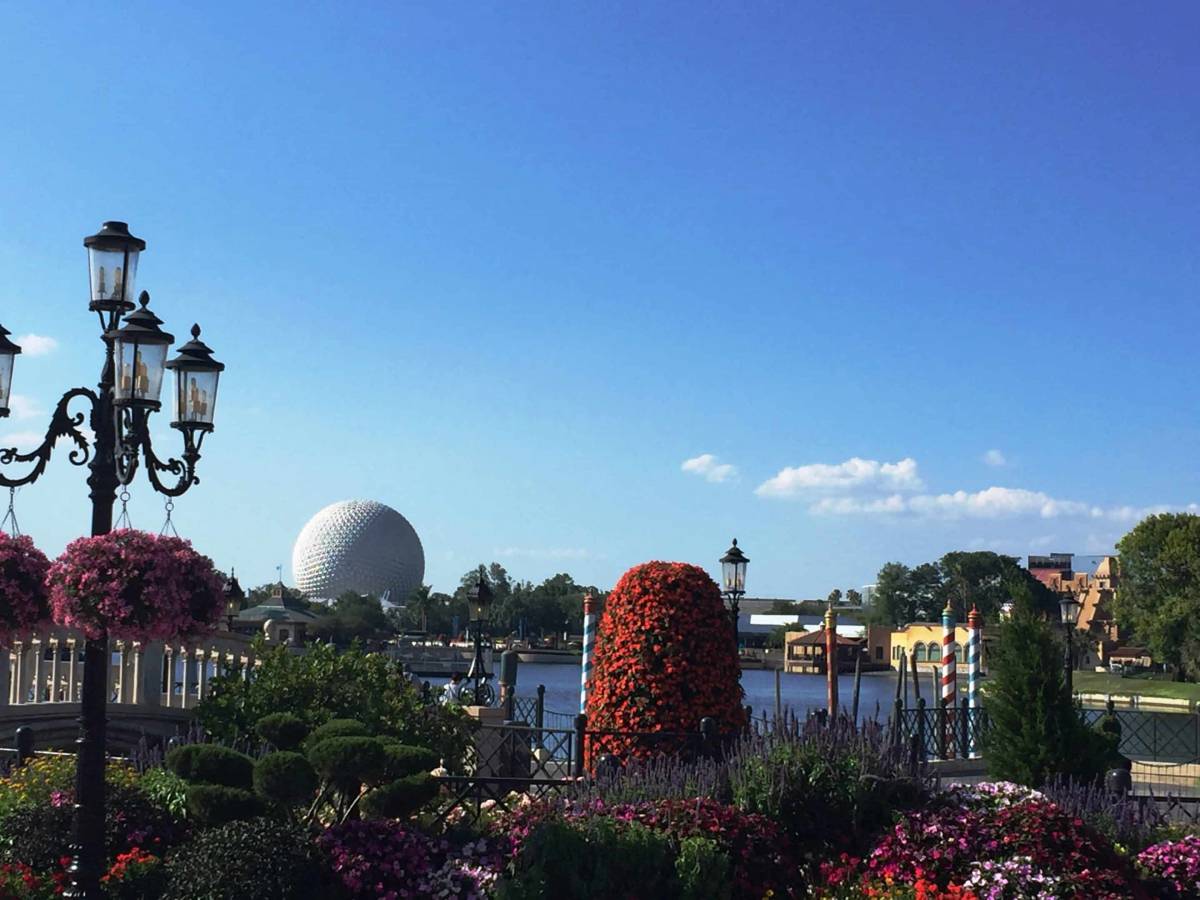 It was the hottest day of the week when we visited EPCOT. Not having upgraded our tickets to include express passes, we were thankful that the queues were not significantly long, and more importantly, that the majority of rides and attractions were located inside air conditioned buildings so any waiting was less of a strain.

We experienced elements of the land, sea, space and innovation zones during the first half of our day which also included a journey around the iconic geosphere of Spaceship Earth that dominates this parks landscape whilst listening to Dame Judi Dench narrate the story of human communication from the Stone Age to when computers entered our lives. In the afternoon, we visited the 11 countries of World Showcase. Visitors can experience the sights, sounds and cuisine of each nationality, with every country offering something unique and special too; from the Jeweled Dragon Acrobats at the China Pavilion to a musical boat ride through Frozen Ever After in Norway, each experience is quite simply wonderful. Advance reservations for the restaurants are highly recommended if you wish to be certain of getting a table at peak times. 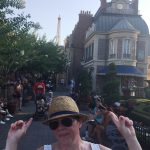 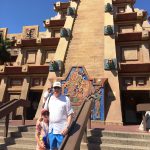 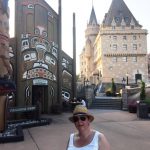 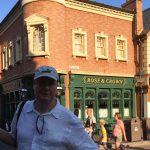 Our busy day concluded with the firework and light display, best viewed from either the bridge between France and the UK or we made a reservation for dinner at the Rose & Crown pub, which overlooks the lake within the UK. If you are lucky enough to get a table outside, there is no better place to sit and watch the sunset followed by the night time fireworks spectacular.

The following evening, we booked to see the Blue Man Group back within the Universal resort. None of us had high expectations but boy, did we have a great time and the show certainly entertained, amused and was magnificently unusual. I would certainly urge you to book tickets – the children have as much fun as the adults but beware! – don’t book to sit in the poncho section (the first four rows) if you wish to avoid getting a little speckled and wet. The poncho that is included will protect most of you but not all!!! 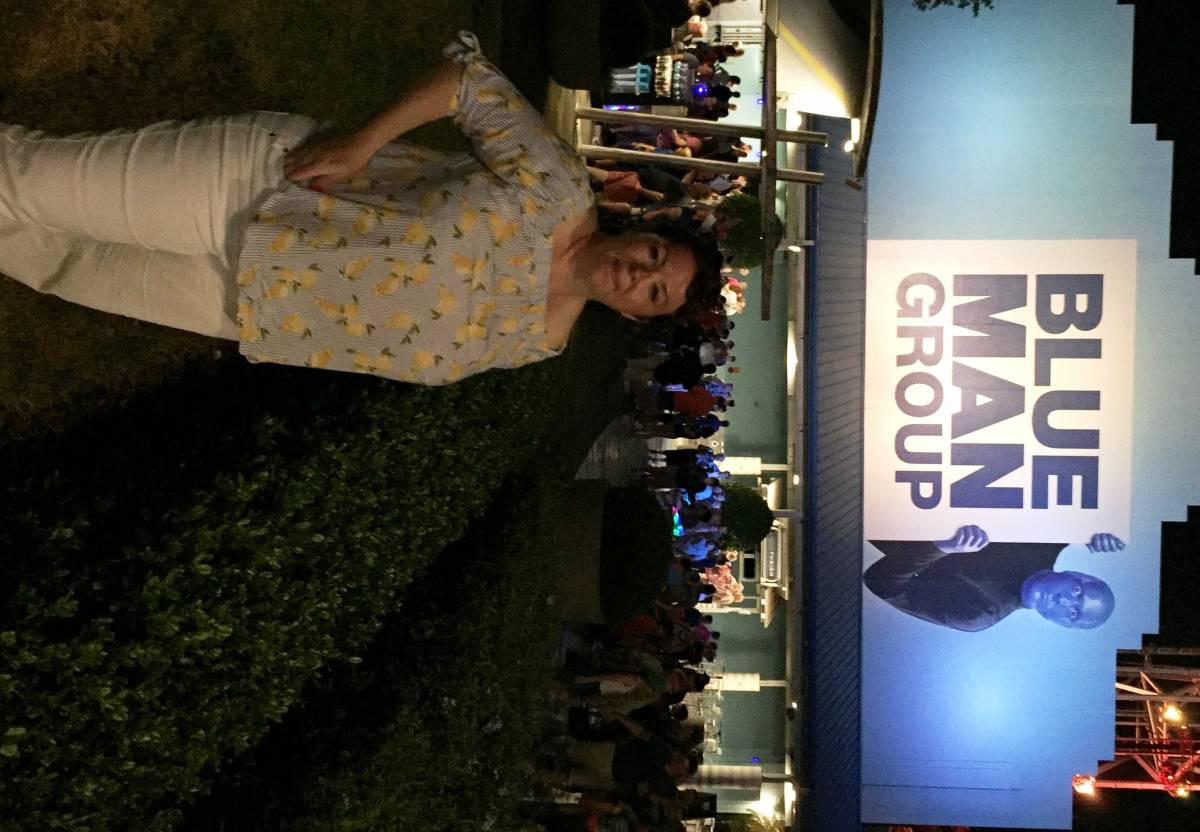 Dinner at Universal was enjoyed most at the Hard Rock Cafe (Universal Orlando Hard Rock being the largest in the world) and the Toothsome Chocolate Emporium. Both are located in City Walk between the entrances to Islands of Adventure and Universal Studios. Reservations for the Emporium are highly recommended, especially if you wish to dine just before or as the theme parks close for the day. 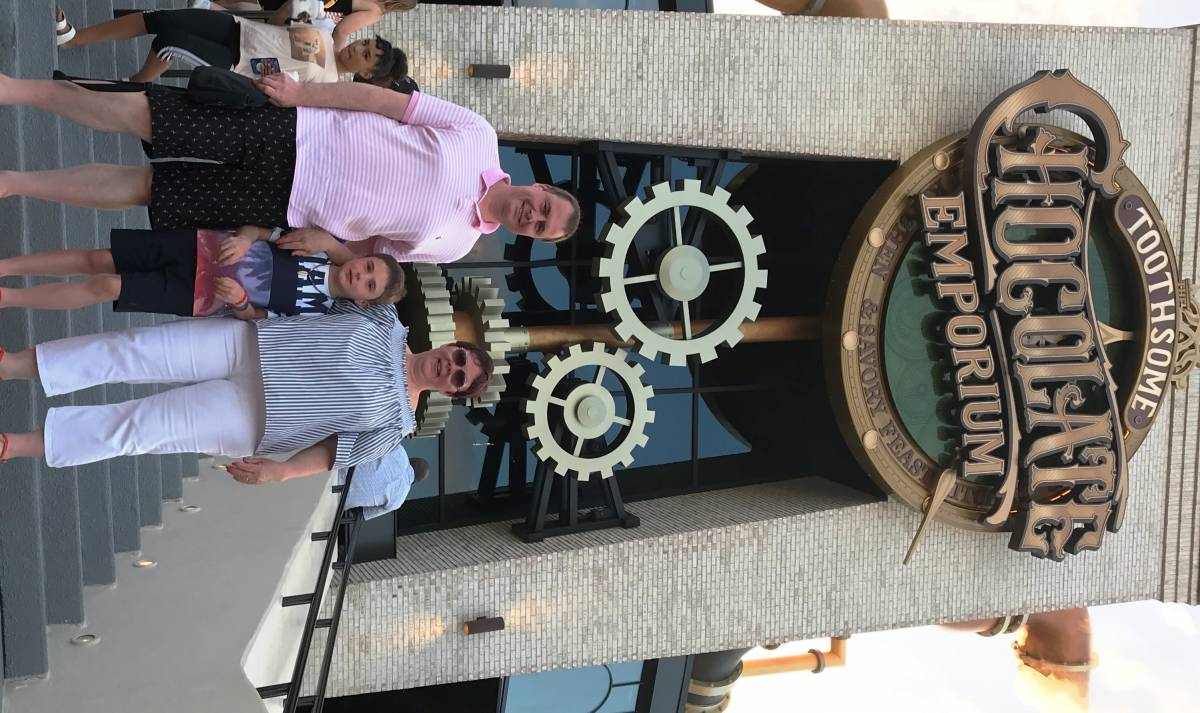 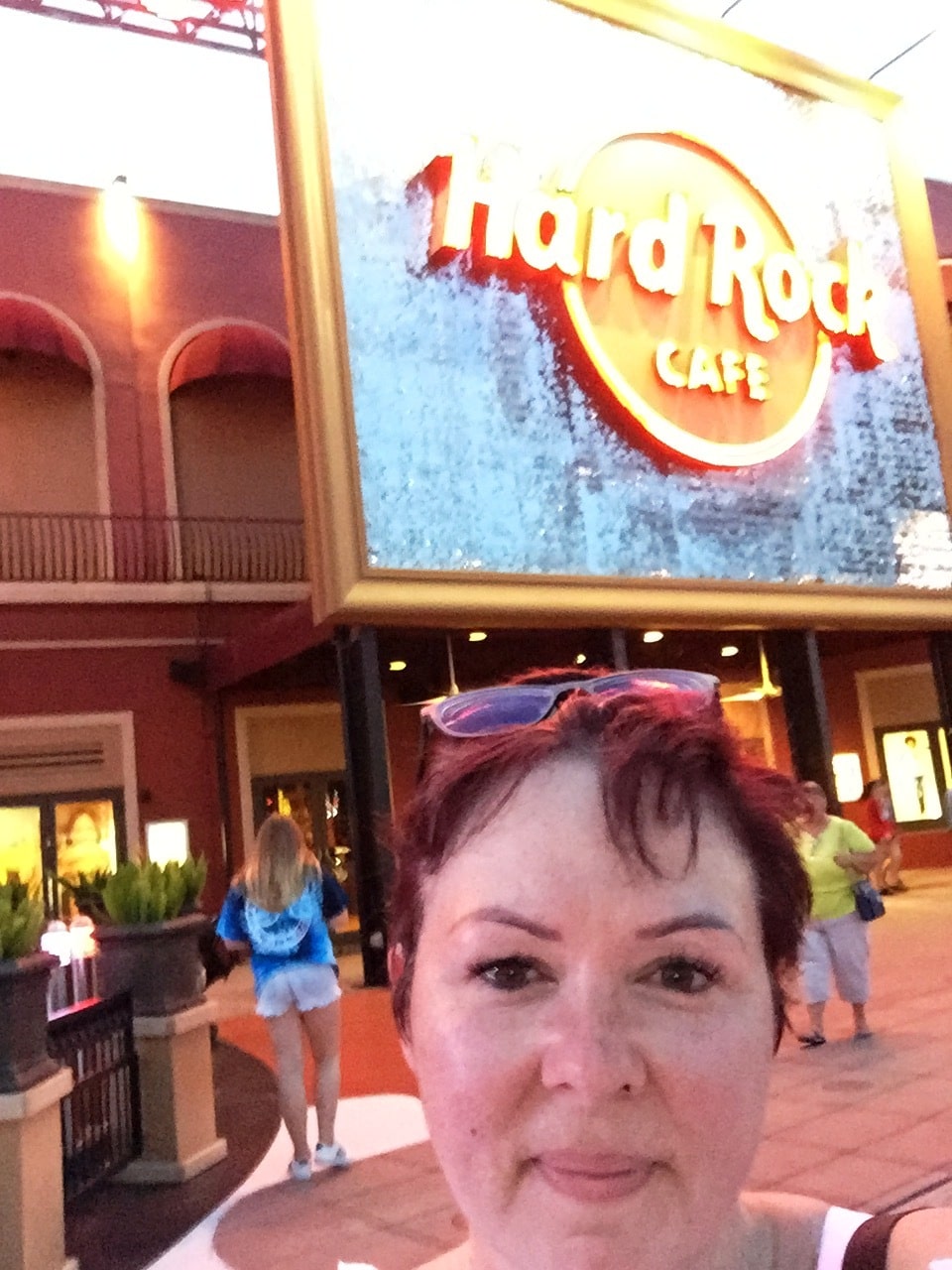 Our final highlight on the last day of our Orlando stay was the dazzling spectacle of Nighttime Lights at Hogwarts™ Castle. Every fan of Harry Potter films and books can experience the rides, including Hogwarts Express which takes passengers between Islands of Adventure and Universal Studios. Meander through the village and down the alleys and streets where these fabulous stories are brought to life. The Lights at Hogwarts is not on every night therefore you should check and plan in advance if you want to experience this outstanding music and light display.

The three of us loved every minute of our Orlando experience and there is certainly something there for everybody however young or old; it truly is magical! Staying on the parks certainly makes life a little easier than hotels on I-drive or perhaps staying in a villa, especially with younger children. It isn’t possibly the most economic way to visit Orlando but, in my view, it is the least stressful and most  convenient way to enjoy this fabulous destination.